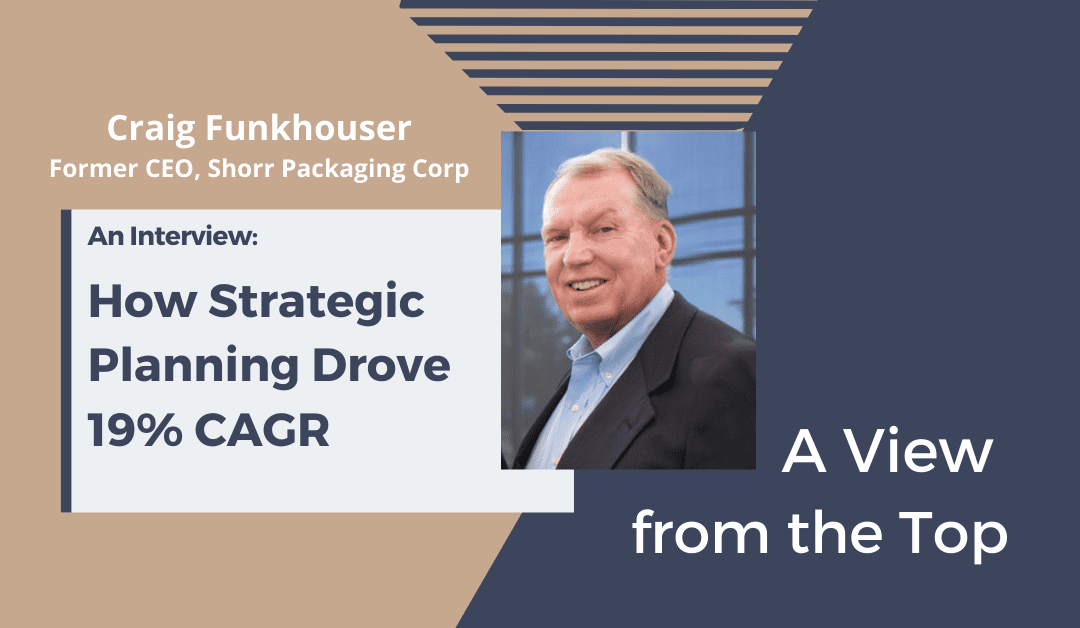 When a leader as accomplished as Craig Funkhouser agrees to share some of his wisdom, we need to listen. So I did. I had the honor of interviewing Craig to learn more about the transformation he led at Shorr Packaging Corp (Shorr) during his tenure as CEO and how strategic planning played a key role.

My core belief is that strategic planning is a unifier that aligns the organization in achieving its most meaningful goals. There’s no more remarkable example of that concept in action than the case of Shorr under Craig’s leadership.

I thank Craig for being generous with his time and sharing such valuable insights. We covered a lot, but here are the top three takeaways from my conversation with Craig:

Strategic planning is transformational, and Craig does a fantastic job of demonstrating its power.

Craig Funkhouser is currently a Board Member of Shorr Packaging Corporation. He recently retired from Shorr, where he served as CEO since October 2014, leading the company through exceptional growth. He also served as Chief Operating Officer before his promotion to CEO.

Before joining Shorr, Craig was an Audit Partner for one of the eight largest public accounting firms in the U.S. for 23 years. He has spent a significant part of his career assisting large multi-national corporations with their merger and acquisition activities.

Lesson #1: Achieving BHAG’s is possible when you get the right people on board.

Most of us would agree that tripling your business in 7 years is the epitome of a Big Hairy Audacious Goal. It’s possible, but as Craig points out, you’ve got to have the right people.

Here’s how Craig talks about using the strategic planning process to unify and build the best team.

ME: When you were first starting to integrate strategic planning into the culture at Shorr, what were your biggest hurdles, and how did you overcome them?

CRAIG:
Some of the biggest hurdles were really trying to get everybody on board. I was the guy from the outside, and I had some pretty bold, big, grand ideas on what this company could be. A number of the managers we had as part of the team had been long-time Shorr employees and hadn’t really been subject to or part of change. And we had to strap on the seatbelt and hold onto the rollercoaster and say, “Hey, we can make this company something that it isn’t and really take it to the next level,” and to get them to believe in it was huge. I thought it would be key to throw out a BHAG using Jim Collins’s term.

ME: Did they think you were crazy?

CRAIG:
Our outside facilitator told me later, “The guys around the table looked at you like you had three heads.” And I said, “I felt like the Blues Brothers when they went up into north suburbs of Chicago and had to put a fence up, and everybody was throwing tomatoes at them.” That’s how I felt. The people looked at me like they said, “No way. We can’t do it. $500M … we couldn’t do it.” And I said, “We’re going to do that by 2022.” And lo and behold, this fiscal year ended September 30th, we not only passed $500M, but we passed $600M as well.

ME:  So how was your organization able to absorb and process all that change over that timeframe?

CRAIG:
The best way that we were able to do it was by hiring better, more qualified leaders. You almost hate to say that and put it in writing, but we improved the talent.  We worked on talent management, upgrading our personnel. By having new leadership and new ideas, we changed the way we did things. This really helped us scale the business a little bit more than what we had done in the past.

ME:  I see this a lot where there’s growth, and then it’s a different skillset or a different level of leadership that you’ll need to take you to the next levels of growth for the company. Is there a way to manage that transition?

CRAIG:
We ran into this issue quite a bit. We had a lot of people that were great managers when the business was $40M in sales before I started. But when it became $400M, they just didn’t fit, and they had to be reassigned, or else they had to go. A number of them had to go. I wanted to know who the up and comers were, the average players, etc. So we implemented a talent management system and used four categories, A, B, C, and D. A’s are your real good superstar players. B’s are your high potentials that could become A’s. C’s punch the clock every day. And then your D’s, really you need to move on from them.

We instituted this talent management process five years ago, and it has become a way of life here. We can go to each of our division managers, and they know where everybody stands, what the process is going to be. So I think implementing a formal talent review process really helped us.

Lesson #2: Constraining the number of strategic objectives is essential to executing successfully.

Constraining strategic objectives is a core tenet of my Fulfilling Strategy process. Strategic “change the business” objectives require much more from your organization than “run the business” projects, and being disciplined about which ones to pursue will be critical to successful execution.

It’s difficult to say “no” to the many good ideas that come along, but when you say “yes” to too many objectives/projects, you are saying “no” to exceptional results.

Craig understood the importance of focus and instilled that discipline in his team to create extraordinary results. Here’s how his team constrained the number of strategic objectives.

ME: So you said that you use the strategic plan for the basis of allocating resources. How did you have the discipline to say no to those opportunistic things that come along?

CRAIG:
Great question. We had all kinds of opportunistic type hires for the most part. And we really had to prioritize them. One thing that I’m a huge believer in is the bottom line’s got to grow faster than the top line. We want to increase our earnings from operations faster than we’re growing sales. We just don’t want a bunch of empty calories.

We sorted out what was most important. What lines of business are we going to get into? We knew that we would lose customers if we didn’t expand nationally or geographically. And one of the first things we did was plan out what locations we had to be in outside of the upper Midwest.

ME: So you picked where you would focus, and then everything went through that filter.

CRAIG:
Yes, absolutely. Now, we had opportunities to hire people in the Northeast. We had opportunities to acquire businesses. We always put them to the side and said, “We could do things greenfield versus buying a business.” We took the risk off the table, so all this has been organic growth, which has made it even better.

ME:  That makes a lot of sense. How do you know if you have too many strategic initiatives? Is there a way to find that out sooner than later?

CRAIG:
Yeah. When we have too much stuff on the table, and things don’t get done, that’s when it’s a killer. And I like the idea of trying to limit any initiatives to maybe four or five per year and really focus on those four or five.

When we started the strategic planning, I remember we had ten objectives, six were growth, and four were “to do.” And we ended up having to cut the two lower priorities out of there. It just didn’t make sense. We didn’t have the manpower, the management depth to really take on that many at that time. It was so smart to pair it back to the four growth objectives and the four must-do objectives at that time.

Strategy is not a planning document; it is the process of daily discipline. An effective operating rhythm is essential to communicate priorities that align the organization and create the visibility of project status that fuels accountability.

Craig implemented a discipline that helped fuel Shorr’s growth and is still in place today. Here’s how he approached the need for an operating rhythm.

ME: One of the challenges I see is a lack of discipline. The distractions accumulate and compound if you don’t have an operating rhythm and method of aligning goals and priorities continuously.

CRAIG:
Yes. We instituted discipline. It was twice a month senior management meetings that never occurred here before. And so we put those in, and that’s where we talked about people issues and hiring, et cetera, in what order of what’s most important.

CRAIG:
Yes. That was part of it. Yeah. But I guess that was more part of the formal strategic planning meetings where we would review the initiatives monthly.

ME:  You did that monthly?

CRAIG:
Yeah. And I know it sounds like we’re a hardass doing it monthly, but this was new. This was all new to the company. We have a pretty heavy peak season. So we did not meet in October, November, December, but we met monthly the other nine months of the year.  It held the people accountable.

And as basic as it sounds, one of our must-do strategies was to improve our communications with our employees. These were employee-owners who had no idea how the business was performing. Except for once per year at the Annual Meeting, the company never shared the sales volume or the gross profit percentage with the employees. And I told the senior leadership team, “We need to share this information with our employees if we’re going to improve it.” It’s like trying to lose weight without having the scale. They need to know.

ME:  It probably created some trust too.

ME:  How do you keep momentum focused on those four longer-term growth initiatives that take a while to see measurable progress? What’s your advice for those longer-term goals?

CRAIG:
So what we did was for each of those four growth-type items or in the subsequent strategic plans, the five or six that we had, we assigned two senior-level strategic planning team members to each of those initiatives. And that’s what we did at the monthly meetings. We held them accountable to report on where they stood and the status.

Quite honestly, I did not assign myself to any of the strategies myself. I was there just to help the team out in getting these things done. Having a facilitator there, an outside third-party individual, I thought was really, really important. (I couldn’t agree with Craig more on this point and you know where to find me!)

Wow, those are some powerful insights. I’m so grateful to Craig for sharing his time and hard-earned wisdom so that we can all benefit. I wish him continued success as he begins his next chapter.

I encourage you to think about how Craig’s approach to strategy execution could help your organization achieve your Big Hairy Audacious Goals in 2022 and beyond.

Be sure to check out my next bonus post where Craig shares his advice for brand new CEOs.